Have you ever been planning an encounter and thought to yourself ‘I want my party to fight a boat.’ Or were you playing Warhammer Total War 2, saw the Necrofex Colossus and thought to yourself ‘Yes. That.’ Well boy oh boy do I have the encounter for you! This was built for an experienced group of 7 characters of 16th level, just to let you know the level of wild you are about to get yourself into. Hold your breath!

The war between the Vicious, the demigod of Slaughter and Bloodshed, and the Eventide, the demigod of Night and Survival, brought brutality to the world like it had never seen before. The island where their forces clashed acted as a magnet for anyone with a desire for glory tinged with the taste of blood, and stretched it’s influence wide. Even the High Elves, who saw themselves above many of the base needs of the world, felt the battle’s clarion call beyond a point they could ignore.

The Njoskorii, a council of five High Elven admirals gathered their armadas and set sail to aid the Eventide in her struggle against her cruel adversary. Versed in both martial tactics and magic, their powers were always more potent combined than separate and they suspected the conflict before them would push the limits of all their arts. Their arrival, however, played into the waiting clutches of the Vicious. Trapping the Admiral’s flagships in a bay crowded with the wreckage of the very fleets they arrived here with, the powers of the demigod of Slaughter brought the Njoskorii’s doom to life. Made of the shattered remains of galleys and the writhing bodies of their suffering crew alike, the Colossus of the Deep pulled its massive self from the floor of the bay and set to its brutal task.

Though unable to truly defeat it, the High Elven Admirals used their spells in concert to bind and seal the monstrosity at the cost of their very lives. In their last efforts they plunged their enchanted cutlasses into the high mast of the beast, rendering it inert, and crawled back to the remains of their ships to die and act as guides to anyone unfortunate enough to ever find this dreadful place again. Here they wait to this day, arms outstretched and waiting to gift the horror below to whomever returns their magical blades to them. For good or for ill.

Meant to both be a combat encounter and a puzzle, the subaquatic environment this encounter takes place in is what gives it a real next level challenge. Let’s meet our beasties first, though, shall we? You will need:

1 Warforged Colossus – Reskinned to look like a Necrofex Colossus, or a bipedal mass of boat parts and corpses with a grouping of cannons replacing the left forearm and hand.

2 Drowned Masters – Did this encounter really need a debilitating disease like Bluerot in it? Yes, yes it did.

8 Coral Drakes – Third party monsters? In MY encounters? Their breath weapon is a cloud of their own young that can blind you. Perfect.

Now that we have met our lovely cast let’s talk about the battlefield! The bay this takes place in is encircled by thick stone jetties, which do their part to keep the waves calm and controlled. The water here is 90ft deep and 250ft wide at its largest, tapering considerably at its mouth where the jetties hold the ocean back. The end opposite the mouth is an abrupt sheer cliff right about where the shore is. Halfway up this underwater cliff is a large stone eel head with its mouth open that is packed with great stones rendering passage impossible. The surface of the bay is obscured by a thick carpet of ruined ships and twisted wood, hiding the bottom of the bay from above. With the bay being so deep you can fuck with water preasure and what happens if the party surfaces too quickly, but I didn’t and it went fine. They have a hard enough time down there anyway.

Overlooking the bay from the shore is one of the four remaining Njoskorii flagships, it’s captain’s remains still sat in their quarters in a chair bolted to the floor. Sat before a small, five sided table, the skeleton of this powerful Elven Admiral is the only one of its comrades that still clutches its sword and points it eternally toward where the Colossus of the Deep lies under centuries of sand. This is left over from the last unfortunate group that attempted this ritual and couldn’t quite make it. Poor bastards. The party can wrest the sword from the Admiral, which is, like all the Admiral’s cutlasses, a Scimitar of Mooring (instagram.com/the_griffons_saddlebag , 5/26/19) and can be used in the combat if the party is so inclined. The blade, however, needs to be in the Admiral’s hand for the puzzle to be solved and their ritual to be complete.

Beneath the crowded surface the other three remaining flagships sit roughly 100ft from each other in a slight arrow shape, which is pointed toward the stone eel head on the submerged cliff. Between the point of the arrow and the cliff, roughly 50ft from the nearest flagship, is the bow and figurehead of the fifth flagship, which now acts as the chest of the Colossus of the Deep. Each of the three sunken vessels that make the arrow has an Admiral sat at the same style of table and chair as the first back on the shore, along with an outstretched and open hand pointed toward the Colossus of the Deep. The three Njoskorii found in these ships are all without their cutlasses. These three ships are also where you will find the Drowned Masters and the Coral Drakes. Two of the ships have the Drowned Masters ready to strike at whoever enters the Captain’s Quarters, with one of the remains of the Admirals left unguarded. The Coral Drakes have nested in the bellies of the flagships, laying clutches of gooey eggs along the wooden insides. Their territorial nature make them formidable defenders of their lairs, two of which contain two Coral Drakes with the last holding three. The Coral Drakes are not disturbed by the presence of the Drowned Masters,  having grown used to them long ago. Where not properly aligned with each other, they are not enemies either. The Colossus of the Deep, however, spares no thoughts on either the Coral Drakes or the Drowned Masters.

Speaking of our gigantic friend, the Colossus of the Deep awakens in one of three ways; it’s bow emerging from the floor of the bay is disturbed, the rocks that block the stone eel’s mouth are touched, or if anyone tries to leave the surface of the water above. When the Colossus of the Deep animates and engages the party it craves their deaths, created by destruction and bloodshed itself and wishing only to inflict it in turn. It can not speak or understand languages and can not be reasoned with. If it could then what the hell is the point of the puzzle? Speaking of which, the last Njoskorii Admiral can be found sitting at their table and chair in the chest of the Colossus of the Deep, which is absolutely packed with the wriggling bodies of the dead that sank to the bottom of the bay. Once the hull of the ship is cleared of the corpses then the lower half of the High Elven remains can be found here. The rest of them is stuck in a cage that acts as a foot for the Colossus of the Deep. The only part of the battlefield that the Colossus of the Deep avoids destroying at all costs is the stone eel head. “Why is this?” you may ask. Well, dear reader, that shit is completely up to you! For me there was an ancient order of badass Triton warriors sealed back there that the Vicious didn’t want getting out, but that’s a completely different encounter.

You can totally just leave it at the fight if you want, but I personally find encounters with more than one solution to be the most fun. In this case, you may be surprised to learn, the Njoskorii Admirals are the key solving things. The concept of the puzzle is easy enough, put their enchanted cutlasses back in their hand, and gain control of the Colossus of the Deep. Boom, done.

Four of the aforementioned cutlasses are stuck wedged in the heights of the mast that makes the highest point of the Colossus of the Deep, blocked by the rusty bars of a cage that fits over a ragged Crow’s Nest. The cutlasses can be removed using an action and require a DC 20 strength (Athletics) check to pull free. Being magic items they are difficult to destroy, even though they are now covered in rust and barnacles. Each of the blades then needs to be placed in the waiting hands of the Admirals, which in turn need to all be seated at their tables. When this happens the ritual they died arranging is complete as magic pulses from each of them and lances through their massive foe. Whoever stands on the bow of the Colossus of the Deep can give it a command, that it follows until another command is given. Use the creatures on the sunken ships and the writhing bodies that fill the Colossus of the Deep’s chest as extra layers of challenge to your players completing this, having to fight them off, or simply get them to leave.

This encounter is a little crazy and has a ton of moving parts, but a powerful party along with some clever problem solving can make this a memorable moment in your game! If the cheeky fuckers get squirrely and try to swim out of the mouth of the bay or hide behind the jetties you can have the current push them back, if they try to use any water walking effects you can have them take falling damage when they strike the debris on the surface, if they try to hide in the eel head have the Coral Drakes try to flush them out.  There are a ton of ways to dress this encounter and make it yours! I hope this provides a session or two of intense combat and is rewarding to your players when they finally conquer it! Let us know how it goes on our social media pages or on our Discord!

Have fun in the sea! 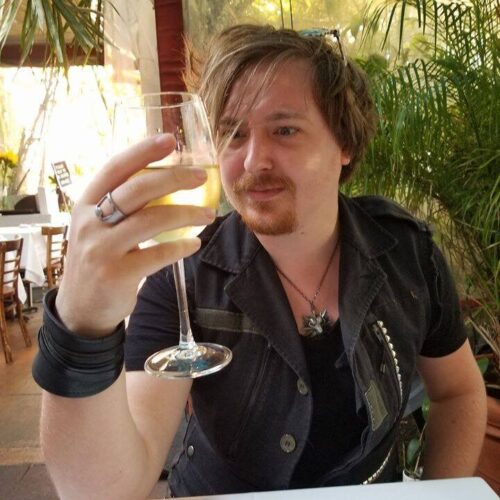 Max Hobbshttps://help-action.com/
Max has been playing D&D for about 20 years, giving each edition his attention. Since 2011 he has been working as a professional Dungeon Master, for both private groups and several publicly accessible groups and events in the Portland area; Adventure League at Guardian Games, Level Eater at the Bodecker Foundation, Orcs! Orcs! Orcs! at Game Knight Longue, and PAX West to name a few!

Episode 68 – Better Have My Honey