Dungeons & Dragons has grown so vastly in popularity that it has curated such a love for its game and environments that more people than ever are creating their own content for it. From artists to writers and everyone in-between you can find new D&D content being released almost daily. This Kickstarter campaign aims to make D&D more accessible to everyone by creating adventures that can be run without the need for a DM.

Ever have that night when your group is all pumped up for your game, and then your DM calls and says he threw up on his dog cuz he was sick and then his dog got sick so he can’t make it to the game? Or maybe you have a group of players ready to go but can’t find anyone to DM for you? Limitless Adventures is here to help. 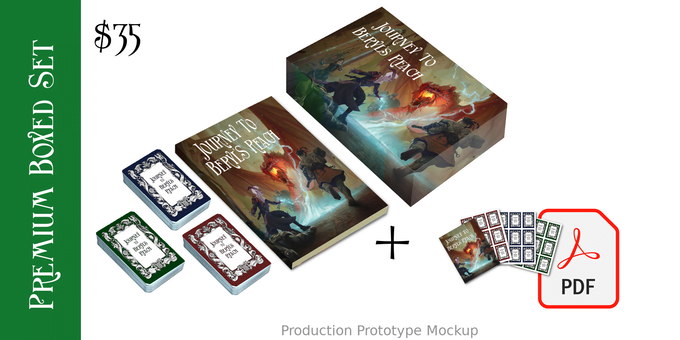 They return to Kickstarter with another installment of their DMless adventure series, Journey to Beryl’s Reach. The adventure is meant for five players of 6th level, and as you read, is meant to run without a DM. It comes with a total of 75 encounters that players use to choose from different categories and build their game, allowing the group to choose encounters that sound fun to them. Journey to Beryl’s Reach comes with 3 adventure paths that can be played as a connecting story arc or as independent adventures. That coupled with the number of different encounter cards included give you a chance to experience it again in an all new way, giving it great replay value.

With an already successful DMless adventure under their belt, Blood Queen’s Defiance, which they have a tier you can bundle with, and a list of lengthy stretch goals they plan to deliver some quality gaming goods. $35 will get you the whole set for this adventure while pledging at their higher level will also get you their first adventure, Blood Queen’s Defiance, for a total of $65.

You can check out their project for demo videos and more here!

This project was fully funded and raised over $36,000, nearly double their goal!

What Is A Background & How To Use It