5 Monsters That Are Underused

I know what some of you are going to say. Something to the tune of “but my game has those doing something something something” and that’s fuckin awesome, buddy. I am glad you have included these monsters. Now that we have addressed you and given you all the attention in the room, let me give a big hello to everyone else here and pose a question to them. Orcs, Goblins, Trolls, Skeletons and Dragons are cool and all, but have you ever wondered what else the beautiful 5th edition Monster Manual has in store for you? Sure, these monsters still have tons of unique stories still left in them, but let me share the creatures I see in the Monster Manual that are tragically cast by the wayside. These are in no particular order and are solely based on my personal observations, just in case you are curious. 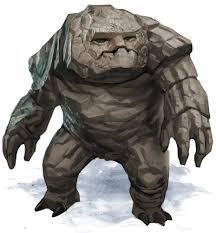 These sweet rock babies come to us from the Elemental Plane of Earth and love them some dirt. Although they hail from a far off realm they have a deep connection to all things born from the earth, even having the ability to breathe life into boulders close to them. This means in a fight every single Galeb Duhr becomes THREE Galeb Duhr…Galeb Duhrs… Galeb Duhri? Galeb Duhrae? Three rock buddies. When a Druid needs a craig guarded or a Wizard needs some protection for its crazy-ass tower these elementals have their backs, having both a fantastic memory and astounding patience. If this shit isn’t cool enough for you they also have a shocking knack for stealth! I know, right? A rock? If they hold still they are totally indistinguishable from a big old boulder, so the party won’t know what hit them until it’s too late!
Need an adventure hook for your old friend Galeb Duhr? Try this! A farmer at the edge of town is offering his plumpest cow to anyone who can keep a large boulder off his land for two whole days… 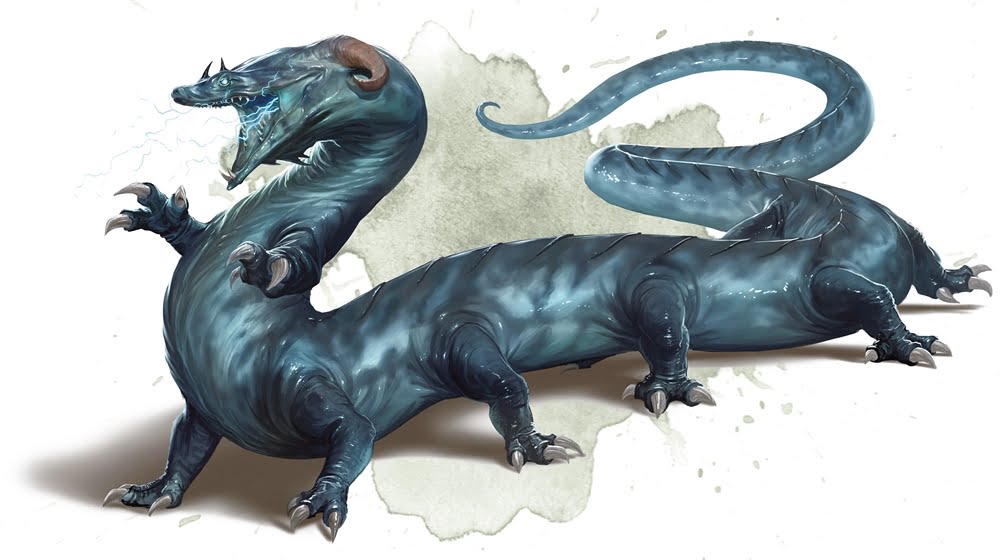 Scottish folklore is jam PACKED with unforgettable creatures and spirits, most of them finding their home in Dungeons and Dragons. The black sheep of Scotsman’s flock seems to be the Behir, a fairy that takes the form of a serpent and is only seen during lightning storms. Our beloved D&D drops the fairy relationship, but outside of that they are mostly unchanged. These centipede-like, twelve legged blue serpents were created by Storm Giants to battle Dragons, given a breath weapon to rival Tiamat’s children and the ability to constrict like a big old python. Like an anaconda fucked a crocodile in a hurricane. You know, a nightmare. If that isn’t enough to make your plucky party shit their collective plate mail, the Behir’s bite can swallow you whole and they can slither super fast and climb at nearly the same rate!
A Behir can stand in for a Dragon in most stories, but if you want a hook just for them give this a go! The old temple high up in the mountains has always had storms surround it, but now there are shapes in the lightning… 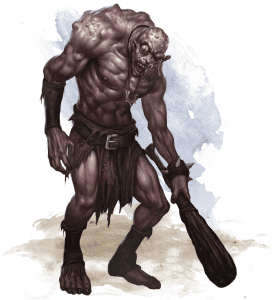 By now, dear reader, I have made it clear that I am a huge fan of history and mythology. Shocker, yeah? Covering both things at once it is said that Fomorians may or may not have been the first people of Ireland. Their name roughly translates to ‘giants below’ and D&D embraces that fully! The Fomorians are fey giants from beautiful caverns in the Underdark, contrasting their horrific appearance perfectly. From these shadowy grottos they lord over countless slaves, working them to death and eating them when they can no longer serve their new masters. Their bodies are covered in blisters and crippling deformities and, with a flash of their sickly eyes, bestow the same deformities to unsuspecting characters! They only get to save against this effect, which gives disadvantage against all strength and dexterity saves, check, and attacks, at the end of a long rest. END! ONCE A GODDAMN DAY! On top of all that the stare of a Fomorian does a ton of psychic damage. Oh, and their club doesn’t fuck around either. Is that enough for you, bud?
Fomorians can easily fit into any story with giants or fey, making excellent villains with no scruples and unshakable narcissism, but if you need a hook I’ve got your back; People have been disappearing from a mining village, their workers returning unrecognisably disfigured, after refusing tribute to the ‘King in the Cave…’ 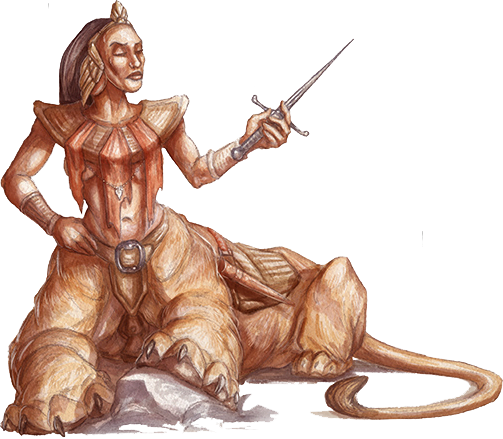 The Lamia wouldn’t exist if Zeus could keep his dick in his divine robe. That being said MOST of Greek mythology wouldn’t exist if Zeus wasn’t the fuckboi that he clearly was. The Lamia, according to the myth, was a queen and lover to Zeus, who Hera hated and turned into a baby eating monster. In Dungeons and Dragons these stunning beasties turn crumbling ruins deep in the harsh wilderness into elaborate party mansions with enticing illusions and other alluring magic. When in need they send their preferred servants, the Jackalwere, on violent beer runs, like so many drunk college students. Oh, they also steal everything they can get their hands on and take slaves, too. These decadent despots of the deep deserts delight in the death and dance of doomed denizens of their demonic domiciles. Sure, with the upper body of a very sexy mage and the lower body of what I assume is also a very sexy lion, the Lamia is badass in combat, but they would rather leave their minions to that. They like to spend their time sowing chaos and making offers to the six fingered daddy himself, the demon prince Graz’zt. I’ll take him over Zeus any day.
If you want to inject some super hedonistic twists to your stories, Lamias know just how to fill that gap. Here is a hook they can get wild with; A massive crowd has gathered around a few wildly dressed revelers inviting everyone to a palace far off in the shifting sands… 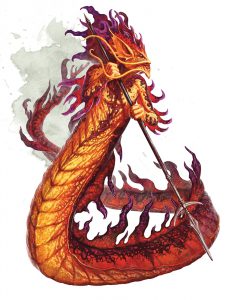 Someone didn’t know how amphibians work. It may have been Pliny the Elder or it may have been the writers of the Talmud, but someone took a stab and missed dramatically. Their confusion and wild speculation is our benefit, though, because Salamanders in D&D are DOPE! Creatures from the elemental chaos of the Plane of Fire, Salamanders are one of the most striking and beautiful critters in all of the Monster Manual. They are one of only two entries in the book that have a clear metamorphosis over the course of their life, starting their first year of existence as a Fire Snake after emerging from an egg of solid obsidian. They get bigger and badder as they age and can shape metal with their bare fucking hands! Not only can they ruin the Paladin’s favorite sword, they are totally immune to fireball, the meme-iest spell in the damn book. Our firey friends may have some of their number slithering free in the land of flames, but most of them are slaves to Efreeti. Some spellcasters and/or magically inclined metalcrafters give binding these creative elementals to their sides a go, but no matter who you are, summoning a Salamander is a dangerous game usually ending with an offended Efreeti arriving and killing you and your smoldering friend. Tough luck.
Fire is usually an easy theme to work with, giving you plenty of dramatic ammunition. If you need a spark to get your Salamander adventure started then try this out; The local blacksmith is the most talented in the land, but it seems like devastating fires follow them wherever they go…

I hope this has expanded your monstrous horizons and opened the door to fun and dangerous new adventures. Now get out there and give these neglected creatures the love they deserve! Should the mood strike head over to the Help Action discord and share your stories with us!

Max Hobbshttps://help-action.com/
Max has been playing D&D for about 20 years, giving each edition his attention. Since 2011 he has been working as a professional Dungeon Master, for both private groups and several publicly accessible groups and events in the Portland area; Adventure League at Guardian Games, Level Eater at the Bodecker Foundation, Orcs! Orcs! Orcs! at Game Knight Longue, and PAX West to name a few!

Episode 14 – How To Hoard Your Dragon

Episode 65 – Pleasures of the Flesh Golem